UPDATE 04-2018: Updated the blog to be more up to date with current amazon configuration, also the default configuration is now multiple account support.

Jeff Wierer has written this documentation in Oktober 2014. This is a 2015 update containing windows server 2012R2 and ADFS 3.x

Many of you are using Windows AD for your corporate directory and since Windows Server includes ADFS, it makes sense that you might use ADFS as your IdP.
To set up my domain, I used Amazon EC2 because that made it easy to access the domain from anywhere.
My EC2 instance used Windows Server 2012 R2 running, AD, and ADFS. (Remember that the IIS dependency was removed in ADFS 2012 R2.)

If you want to do the same, I encourage you to use a nifty CloudFormation template that creates a Windows instance and sets up a domain for you.

How Integration Between AD FS and AWS Works

Before we get too far into the configuration details, let’s walk through how this all works. 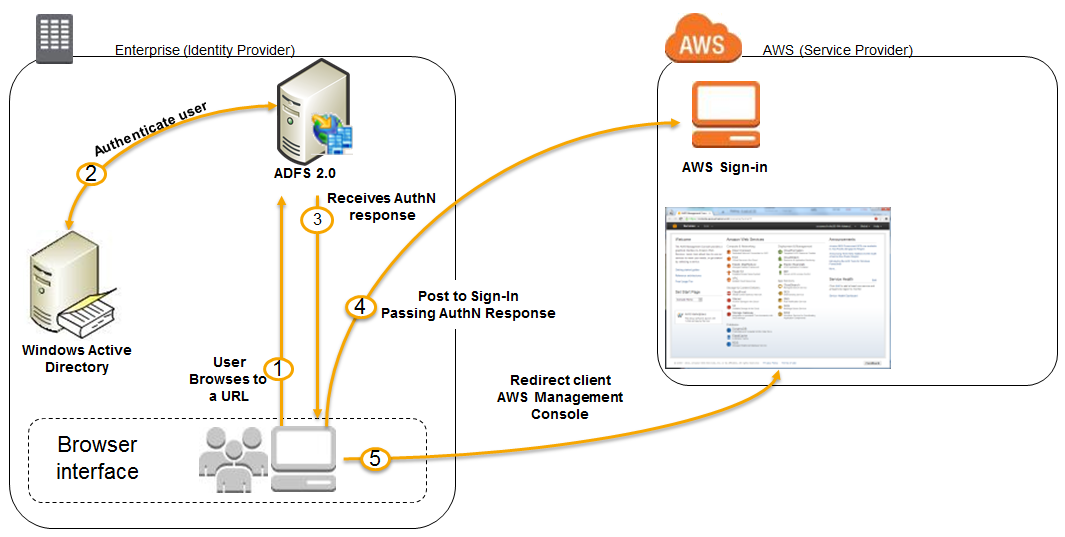 From Bob’s perspective, the process happens transparently. He starts at an internal web site and ends up at the AWS Management Console, without ever having to supply any AWS credentials.
Now that we understand how it works, let’s take a look at setting it all up.
BTW this post is fairly long. The next couple sections cover installing and configuring ADFS.

If you already have ADFS in your environment, you may want to skip ahead to the Configuring AWS section.

If you want follow along with my description, you’re going to need a Windows domain.
If you don’t already have one, I recommend that you take advantage of the CloudFormation template I mentioned earlier to quickly launch an Amazon EC2 Windows instance as a Windows AD domain controller.

For demonstration purposes, I used a single user (Bob) who is a member of two AD groups (AWS-awsaccountid-AWS-PROD-ADMIN and AWS-awsaccountid-AWS-PROD-DEV, replace awsaccountid with your actual account id, for example : AWS-123456789-AWS-PROD-ADMIN) and a service account (ADFSSVC) used by ADFS. Note that the names of the AD groups both start with AWS-. This is significant, because Bob’s permission to sign in to AWS will be based on a match of group names that start with AWS-, as I’ll explain later.

If you follow along with the instructions, make sure you use exactly the same names we do for users, AD groups, and IAM roles, including uppercase and lowercase letters.

Perform the following in your domain:

With my accounts and groups set up, I moved on to installing ADFS. On the Windows Server 2012 R2 i’m using we can install adfs 3.0 out of the box so i used this one. Open up the server manager and use the “install roles and features”. 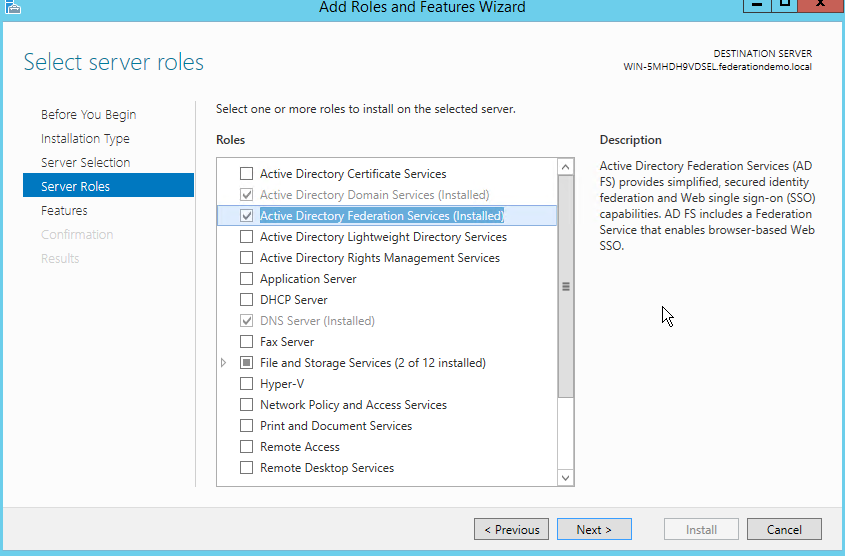 Confirm the changes you are going to make and install ADFS, no reboot is needed

The next step is to configure ADFS.
Launch the console by → Start > All Programs > Administration Tools > AD FS Management

If you want to follow along with my configuration, do this:

1. Select Create a new Federation Server in a server farm 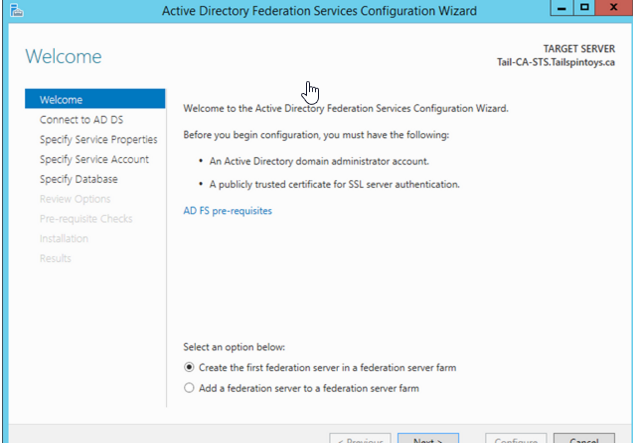 2. Select a domain admin account, i used the default administrator in this demo. 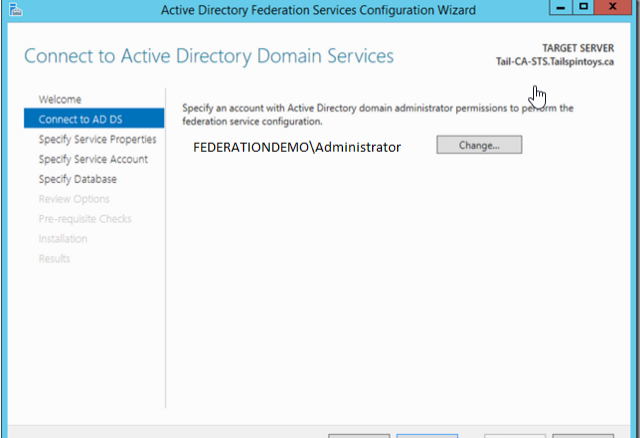 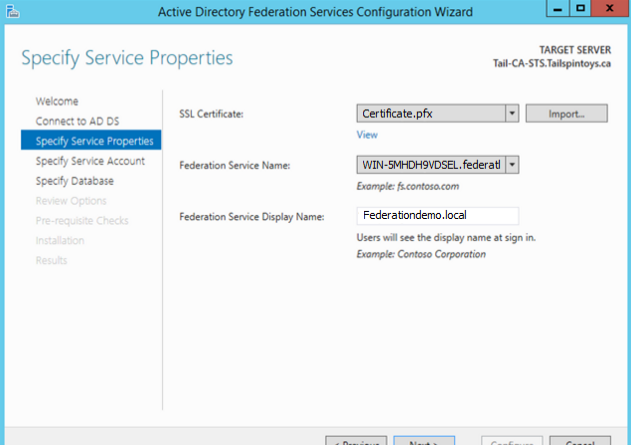 4. Remember the service account I mentioned earlier? This is where you use it. 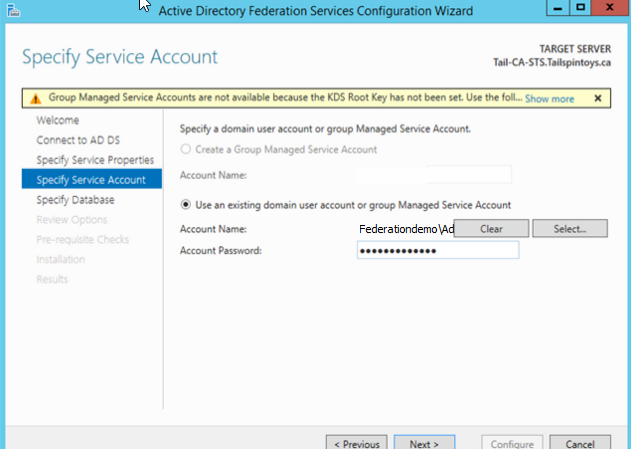 5. Select the internal database, or a sql server if you have one available 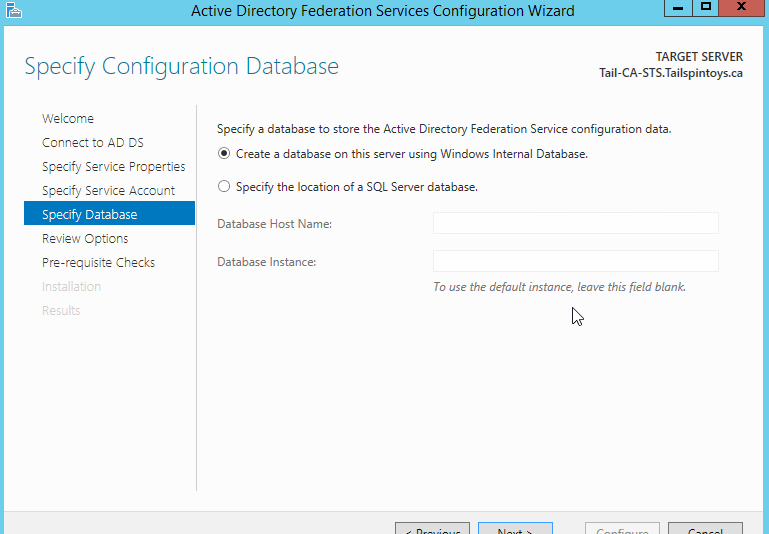 6. Review the options and then check the prereqs, click configure to begin the installation 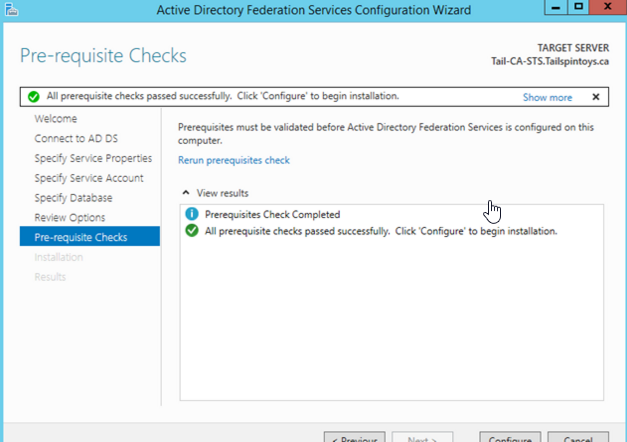 7. When it’s done, the following will appear: 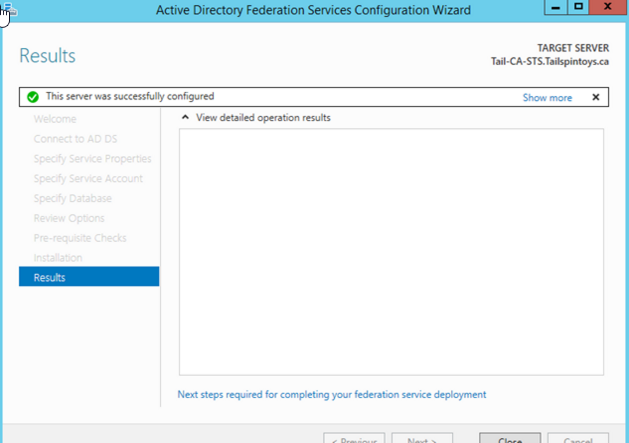 If so, skip ahead to the Configuring AWS section.

During my testing, I went through this wizard on several different Windows servers and didn’t always have 100% success. In some cases I encountered the following error message:

It turns out this is a known issue that can be fixed by running the following at the command line (Make sure you run the command window as an administrator):

Note that is the name of the service account I used.
If the command is successful, you see output like this:

You’ve finished configuring AD FS. The next step is to configure the AWS end of things.

To do this, I used the AWS Management Console

The first step is to create a SAML provider.If you’ve never done this, I recommend taking a look at the IAM user guide.

Before you create a SAML provider, you need to download the SAML metadata document for your ADFS federation server. By default, you can download it from following address:

You can also use the following powershell script :

I named the two roles AWS-PROD-ADMIN  and AWS-PROD-DEV. Do these names look familiar? They should.

Note: Remember that if you’re following along with this description, you need to use exactly the same names that we use. Make sure that you name the IAM roles AWS-PROD-ADMIN  and AWS-PROD-DEV.

Find the ARNs for the SAML provider and for the roles that you created and record them. You’ll need the ARNs later when you configure claims in the IdP.
That’s it for the AWS configuration steps.

In the preceding section I created a SAML provider and some IAM roles. This is one half of the trust relationship, where the ADFS server is trusted as an identity provider.
Similarly, ADFS has to be configured to trust AWS as a relying party. I configured this by returning to the AD FS Management Console. To recreate my setup, perform the following: 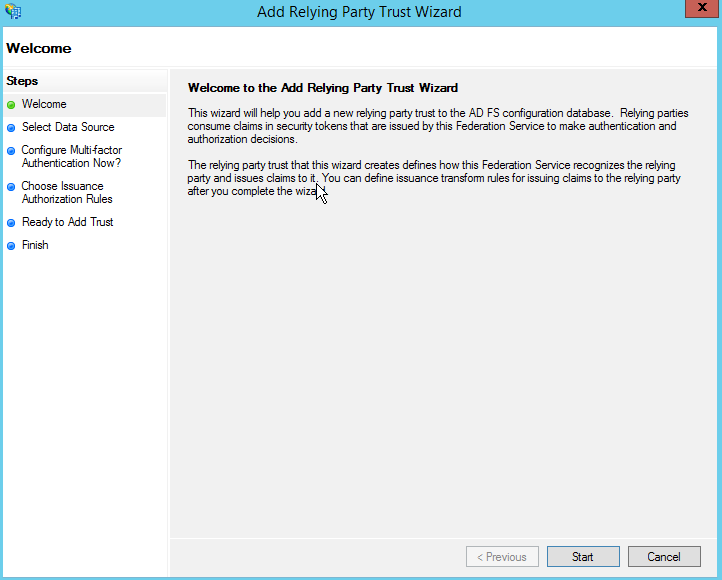 3. Check Import data about the relying party published online or on a local network, enter https://signin.aws.amazon.com/static/saml-metadata.xml, and then click Next. The metadata XML file is a standard SAML metadata document that describes AWS as a relying party. 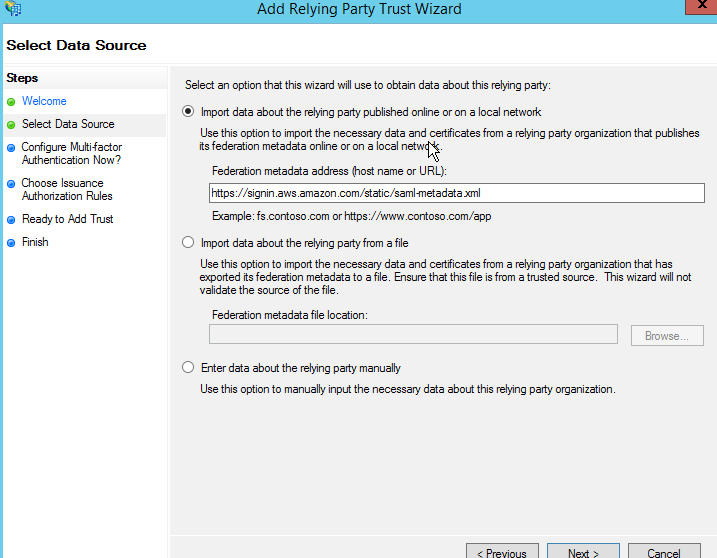 4. Set the display name for the relying party and then click Next. 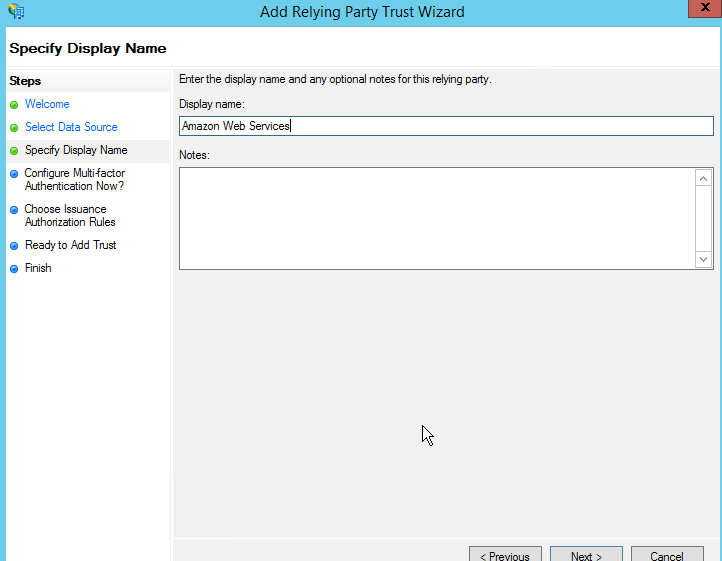 5. We will ignore the MFA settings for now 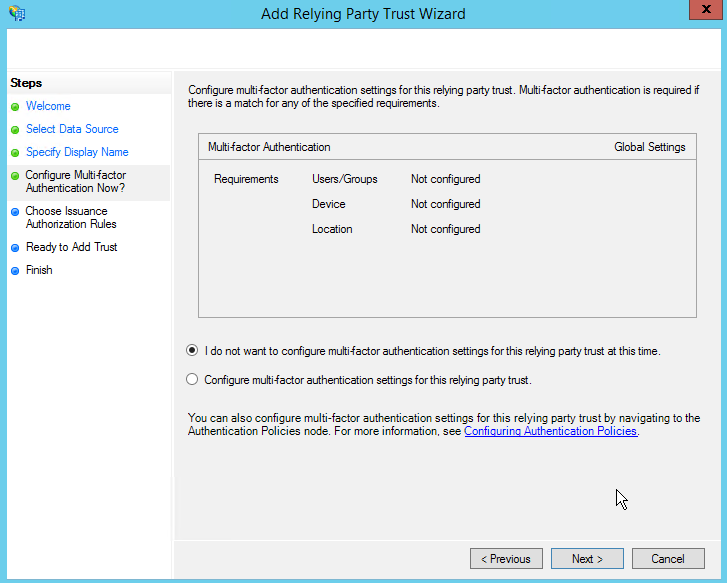 6. Choose your authorization rules. For my scenario, I chose Permit all users to access this relying party. When you’re done, click Next. 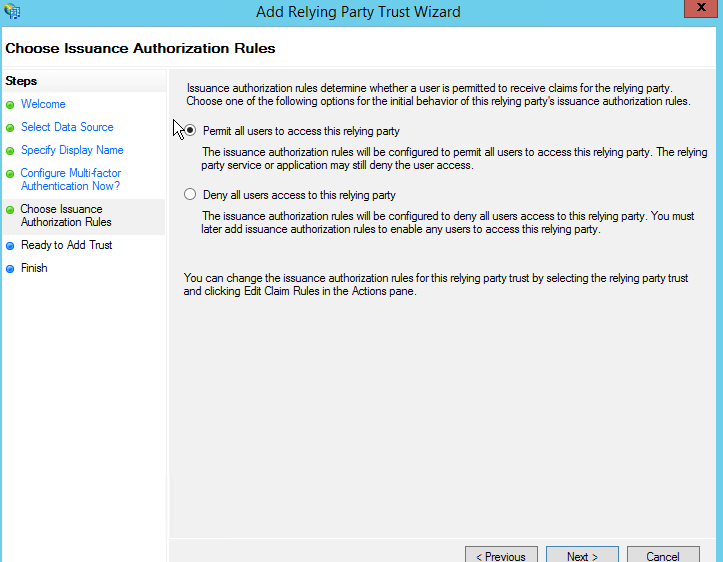 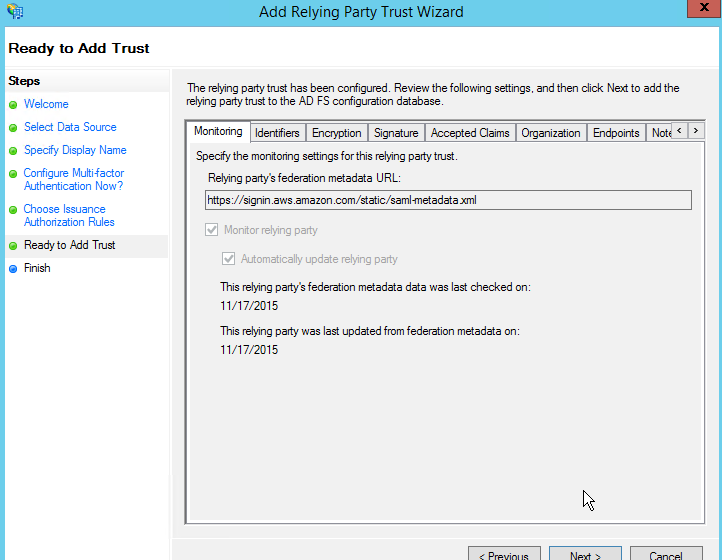 In these steps we’re going to add the claim rules so that the elements AWS requires and ADFS doesn’t provide by default (NameId, RoleSessionName, and Roles) are added to the SAML authentication response.

Right-click on the relying party (in this case Amazon Web Services) and then click Edit Claim Rules.

Here are the steps I used to create the claim rules for NameId, RoleSessionName, and Roles.

2. Select Transform an Incoming Claim and then click Next. 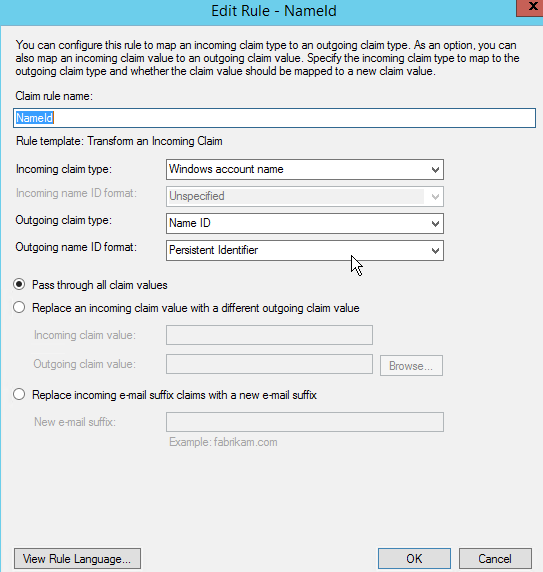 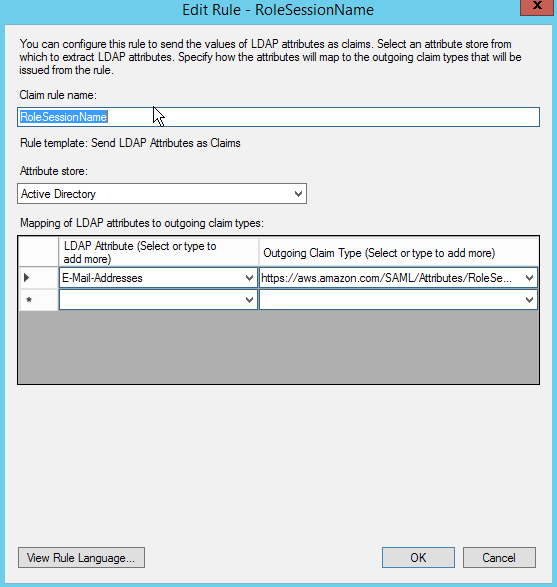 2. In the Claim rule template list, select Send Claims Using a Custom Rule and then click Next.

3. For Claim Rule Name, select Get AD Groups, and then in Custom rule, enter the following:

I use this in the next rule to transform the groups into IAM role ARNs.

This custom rule uses a script in the claim rule language that retrieves all the groups the authenticated user is a member of and places them into a temporary claim named http://temp/variable. (Think of this as a variable you can access later.) 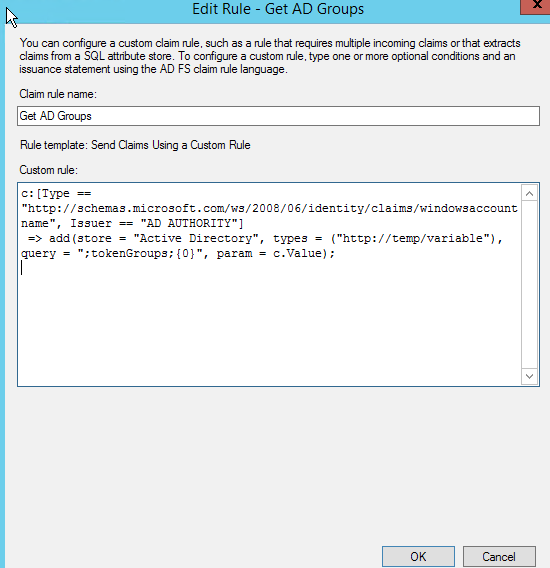 6. Repeat the preceding steps, but this time enter Roles for Claim rule name and use the following script: 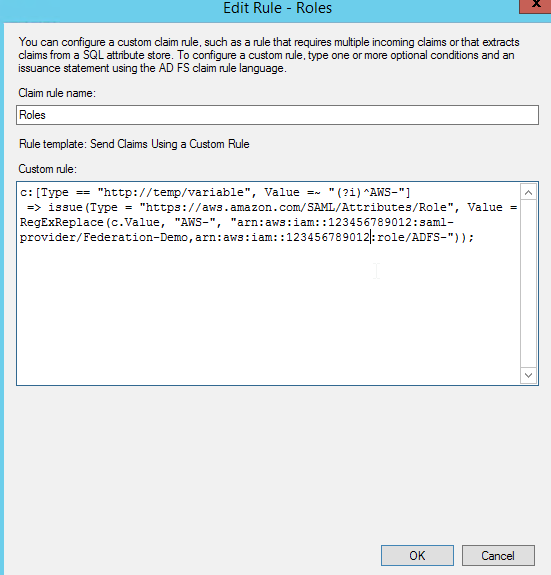 2. In the Claim rule template list, select Send Claims Using a Custom Rule and then click Next.

3. For Claim Rule Name, select Session Duration and then in Custom rule, enter the following: 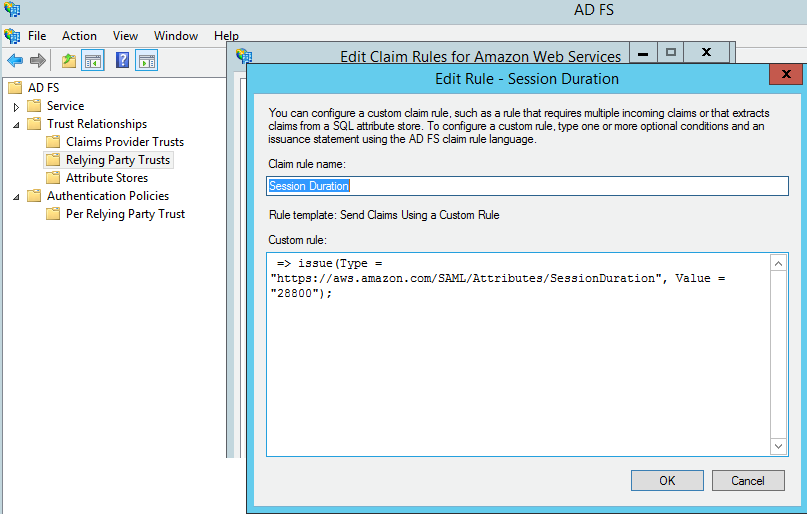 1. In your adfs server, browse to the following address: https://localhost/adfs/ls/IdpInitiatedSignOn.aspx

If you’re using a locally signed certificate from IIS, you might get a certificate warning.
On any other server/client, you need to replace localhost with the actual hostname of your adfs server. 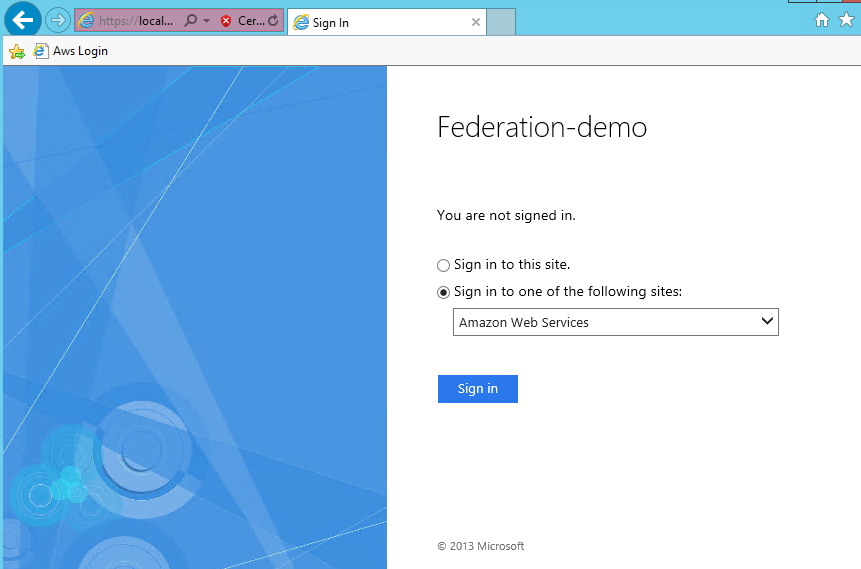 You will be redirected to the Amazon Web Services Sign-In page.

4. Select a role and then click Sign In. (If you are mapped to only a single IAM role, you skip the role selection step and are automatically signed into the AWS Management Console.) 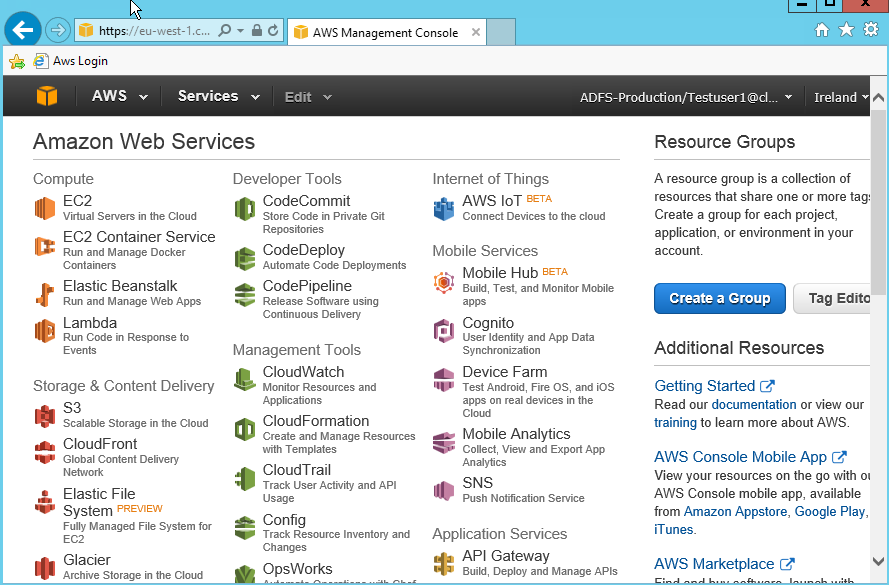 To give yourself a faster working demo download the below zip file.

Give the cf-demo-ad-adfs.yaml to cloudformation.

It will create a 2012r2 server with a domain installed.

You can then login to the server(copy contents of zip file) and install the aws cli, and run the adfs.ps1 powershell script.

Steps the script will do: