Amazon EC2 Systems Manager is a collection of capabilities that helps you automate management tasks such as collecting system inventory, applying operating system patches, automating the creation of Amazon Machine Images (AMIs), and configuring operating systems and applications at scale. It is available at no cost to manage both your EC2 and on-premises resources!

In this article we will focus on using Systems Manager to apply Windows Updates to EC2 instances. Patch Management is always an operational pain point so its welcome that AWS offers a solution.

You start by creating groups of instances by applying a tag called ‘Patch Group’. Then you create a group of patches by forming a patch baseline containing and excluding the patches you require (or use the AWS default patch baseline). At last you create a maintenance window to have your patch baseline attached and applied to a patch group. The actual ‘Patch Now’ run-command is nothing more than an API call, so there’s no obligation to use Maintenance Windows. Personally I’m a fan of Rundeck, so I’ll show you how to have the patches applied to the instances using both methods.

The guest SSM agent setting inside with Windows OS requires permissions to connect to AWS EC2 Systems Manager. We grant these rights by creating an EC2 Service Role with the policy document ‘AmazonEC2RoleforSSM’ attached. Then you can attach this role to your instances. The instance also needs outbound internet connection to be able to connect to SSM. This can be either through an Internet Gateway or a NAT Gateway (or NAT Instance).

If you have this done right, your instance(s) should pop-up under ‘Managed Instances’ in the EC2 console:

Take note of the SSM Agent Version. As said earlier it must be at least version 2.0.599.0. The Systems Manager Service also requires a “Patch Group”-tag on the EC2 instance. The key for a patch group tag must be Patch Group. Note that the key is case sensitive. The value can be anything you want to specify, but the key must be Patch Group.

If done correctly, your tag will be picked up by SSM. You can confirm this on the ‘Managed Instances’ page:

AWS provides a default Patch Baseline called ‘AWS-DefaultPatchBaseline’. It auto-approves all critical and security updates with a ‘critical’ or ‘important’ classification seven days after they have been released by Microsoft. If you’re happy with that you can use this baseline. If you’re not, you can simply create your own according to your requirements: set approval for specific products and patch classifications, exclude a specific KB etc 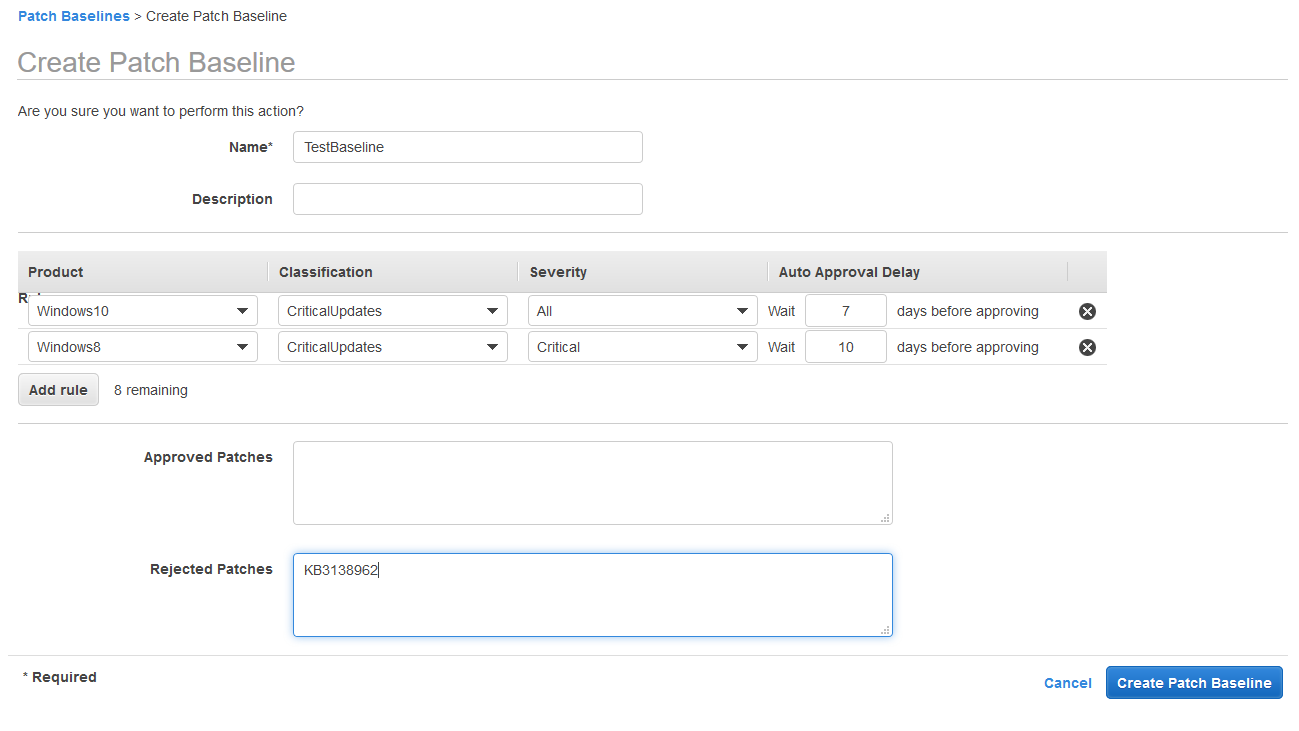 Once your happy with your baseline, you can hit ‘Create’. Now assign it to one or more Patch Groups (or make it the default baseline and throw away the AWS one). Hit the ‘actions’ menu and chose ‘Modify Patch Groups’ 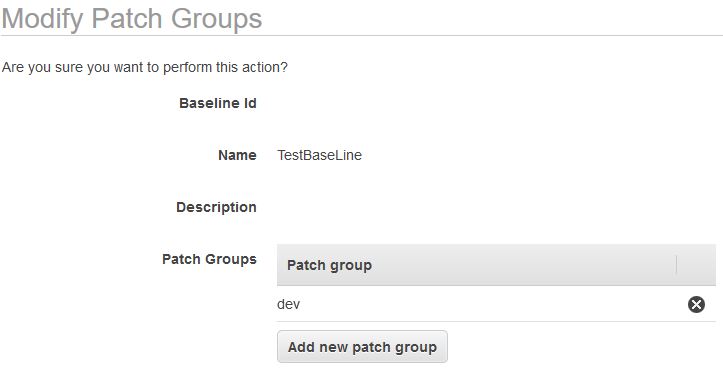 Your baseline is now attached to the specified patch groups. You can now start evaluating your instances against the baseline, and update them accordingly.

Applying the patch baseline to a specific instance or to a patch group is nothing more than executing an AWS SSM run command. You can schedule this run command through AWS SSM ‘Maintenance Windows’, a cron job on a server (like Rundeck) or manual through the AWS Console.

Let’s first check everything manually. In the AWS EC2 console, go to ‘Run Commands’ and create a new Run Command. Select the ‘AWS-ApplyPatchBaseline’ command document and pick an instance run this on. For the ‘operation’, choose ‘Scan’. This will evaluate the instance against the baseline without installing anything yet.

Once the run command finishes, you can go back to the ‘Managed Instances’ page. Highlight the instance(s) on which the run command was executed and click on the ‘Patch’ tab. Here you can see the result of the scan:

Or execute the following aws cli command to accomplish the same:

Back to SSM now to actually create the Maintenance Window. Give it a useful name and specify your preferred schedule. I’m setting ‘every 30 minutes’ just for demonstration purposes, but in a real setup you would most probably choose something like ‘Every  Sunday’. You can also configure your own Cron expression. 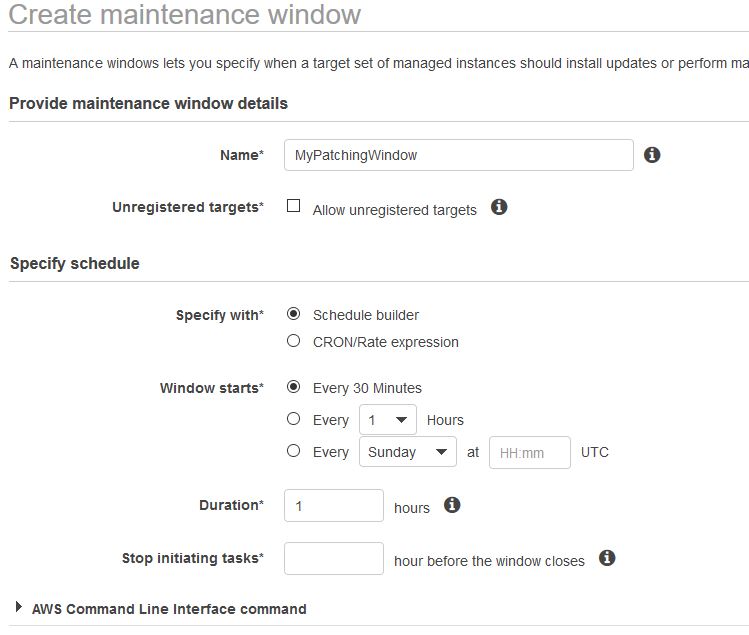 This leaves us now with an empty Maintenance Window: there are no tasks nor targets associated yet.

To assign targets to the Maintenance Window, click on the “Register new targets” button on the “Targets” tab. We dynamically select the targets by using the “Patch Group” tag.

We will now have an ID linked to our “dev” Patch Group. This “Window Target ID” is used in the next step.

From the “tasks” tab of the Maintenance Window, click on “Schedule new task”. Pick the “AWS-ApplyPatchBaseline” document. Under “Registered Targets”, select the correct Window Target ID. For the operation, select “Install”. For the “Role”, select the IAM role with the AmazonSSMMaintenanceWindowRole attached to it (the one we created earlier). Set your preferred concurrency level and register the task by clicking on the blue button. The end result should look like this: 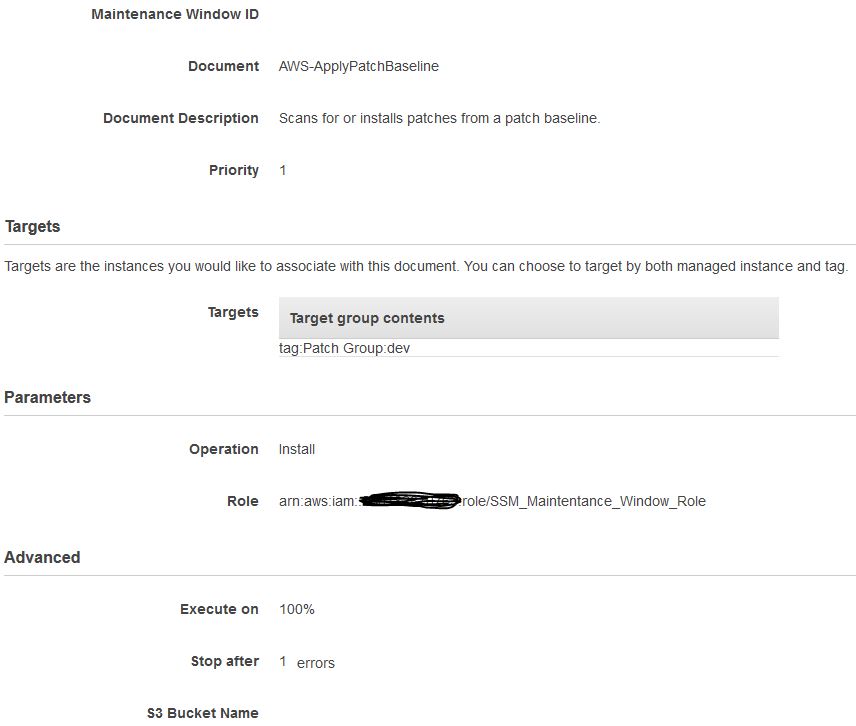 If we now go back to the “Managed Instances” page and look at the “Patch” tab of our test instance, we will see it is not missing any updates anymore!

on the Automation checklist!